Author of The Christmas Village and Return to Canterbury

Goodreads reviews for The Christmas Village

You can watch and listen to me read three excerpts from the Christmas Village on Youtube!
Check them out; they're fun!

Reading one: Jamie sees the village for the very first time

Reading three: Jamie worries that he won't get home to his family in time for Christmas
Posted by Melissa Ann Goodwin at 8:13 AM No comments:

Excerpt from The Christmas Village

Here's another little tease from The Christmas Village...when the village comes to life....


Suddenly Jamie heard whispers. He froze, listening hard. There they were again! His heart beat faster. Was there someone else in the room?
He heard laughter – a girl’s laughter. The hair on the back of his neck prickled. His eyes searched the room, but he saw no one. More laughter, this time a boy’s. Jamie pulled the quilt aside and placed his stocking feet on the worn Oriental rug. Maybe Grandma and Grandpa’s house has ghosts.
The sounds seemed to come from the direction of the . Jamie tiptoed toward the table, his way lit only by the twinkling lights from the Christmas tree. He studied the scene laid out before him, with its tiny cottages nestled in the snow. Something seemed different, but he couldn’t quite put his finger on what it was. Then he heard the voices again, much louder this time.
“Christopher! If you do that again, I’ll … I’ll … I’ll!”
“You’ll what? Tell on me?  Tattletale, tattletale, Kelly is a tattletale!”
Jamie’s jaw dropped and his eyes bulged. He knelt down and brought his face level with the top of the table. The girl skater sat on the ice, her tiny red and white striped legs and white skates protruding beneath her tangled red skirt. The boy skated around her, skidded to a stop and extended a hand. The girl grabbed it and pulled herself to her feet. She brushed bits of snow and ice off her skirt. Shaking a white-gloved finger at the boy, she scolded, “I’ll get even with you, Christopher Franklin Pennysworth, if it’s the last thing I do!”
The boy laughed and skated away. “You’ll have to catch me first!” He took two smooth strides and launched into an impressive double axle that carried him halfway across the pond.
Kelly leaned in and sped after him, her arms swinging from side to side with the aggressiveness of an angry hockey player. Christopher paused to let her catch up. Then, when she was just inches away, he peeled off again. She chased him, huffing and puffing and grabbing at his jacket, never quite able to catch up.


Jamie realized that he was holding his breath. It occurred to him that if he reached out, he could pick up the pocket-sized Kelly and Christopher with his fingers, dangling them like King Kong did in the movies. But he didn’t dare, because something told him not to cross the invisible boundary that separated his world from theirs. So Jamie stayed perfectly still, barely even breathing, afraid that if he moved or made a sound, he would break what seemed to be a spell that had made the village of Canterbury magically come to life.
Posted by Melissa Ann Goodwin at 11:45 AM No comments: 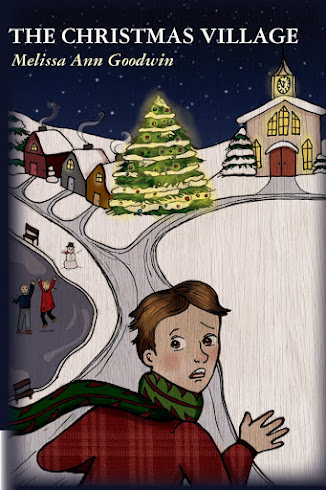 When Jamie Reynolds comes to his grandparents' Vermont home for Christmas, he just wants things to go back to the way they were before his dad disappeared. Time and again he is drawn to Grandma's miniature Christmas Village, where he imagines that life is perfect. Late one night, the village comes to life before Jamie's eyes, and his fantasy of escaping into it becomes very real indeed.

He discovers that the village is called Canterbury, where the year is 1932. Jamie becomes fast friends with Kelly and Christopher Pennysworth, and is taken in by Ida, who runs the local boarding house. But he also makes a dangerous enemy of the mysterious and menacing Jim Gordon, whose return to town is nothing but trouble.

As Jamie desperately races against time to find his way back home, he is suddenly faced with a terrifying choice: to go ahead with his plan to leave, or to stay and help his friends, at the risk of never going home again.

The Christmas Village is an adventure the whole family will love, filled with suspense, secrets and surprises to the very last page. 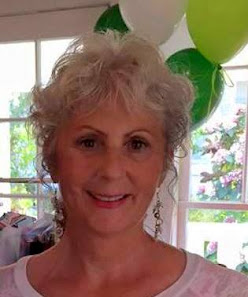 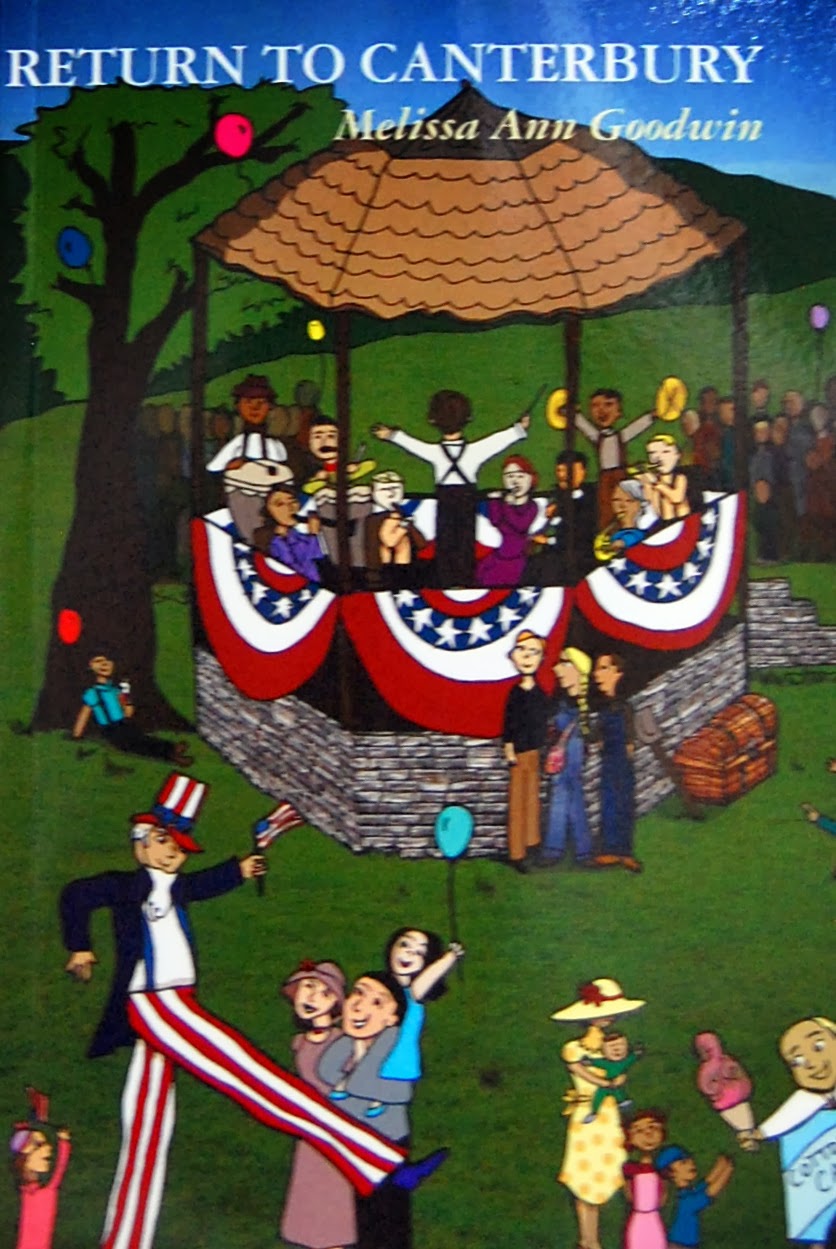 Sequel to The Christmas Village

RETURN TO CANTERBURY is the highly-anticipated sequel to THE CHRISTMAS VILLAGE!

Things have settled down for thirteen-year-old Jamie Reynolds since last Christmas. That’s when he time-traveled to 1932 and wound up in the town of Canterbury, Vermont. There he met Kelly and Christopher Pennysworth, who quickly became his best friends. Back in his own time again, he misses them every day. But, as the July 4th, 2008 holiday approaches, the biggest black cloud still hovering over Jamie’s life is the mystery of what happened to his dad, who has been missing for almost a year.

Little does Jamie know that he will soon reunite with Kelly and Christopher for an adventure even bigger than their last. Together they’ll uncover a secret plot that threatens to destroy Canterbury. But will they be able to stop it before it’s too late? And will Jamie finally solve the mystery of his father’s disappearance? Return to Canterbury with us and find out!

Melissa Ann Goodwingrew up in Andover, Massachusetts, where she spent a happy childhood living in her imagination and writing stories in her head. It was only a matter of time before those stories spilled out onto the written page. She has been published extensively in children's and national magazines and won a Writer's Digest Annual Poetry Competition Award in 2010. The Christmas Village and its sequel, Return to Canterbury, are the culmination of her lifelong dream to write the kind of books she loved to read as a child.